Recently one of our group members shared an 1893 map of the area that showed the housing opposite the park. 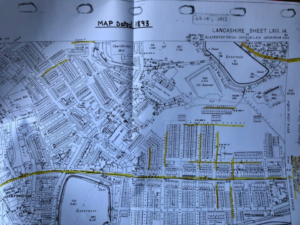 We decided to use this as inspiration for a local walk and to explore the further reaches of what was once the Steiner estate. Frederick Steiner (1789 – 1869), a Huguenot from Alsace Lorraine came to live in Accrington in 1817 where he developed his skills in the Turkey red dyeing and printing industry. As his businesses became more successful he bought a large piece of land on the Church/Accrington border, selling some of it to his compatriot and business partner Frederick Albert Gatty who built his home Elmfield Hall (1853) on the site. Steiner lived at Hyndburn House (now demolished) on the other side of Hyndburn Road and built a large estate of workers houses that extends to Blackburn Road. 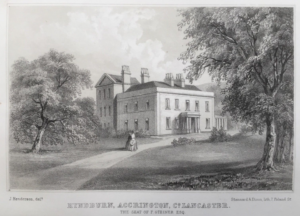 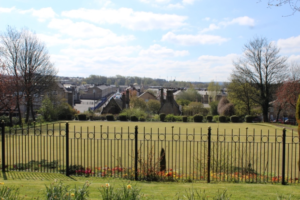 Our walk took us through Gatty Park and alongside the former Hagg Works (Gatty’s business premises) site which is currently being redeveloped as a coffee drive-through. 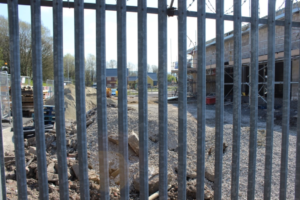 Crossing over Hyndburn Road we looked at the former gate house of Hyndburn House then walked into the streets of former workers housing named for Steiner’s international business connections: Persia, India, Russia, China and Poland. Other streets in the area include Steiner, Emma, Lina, Countess and Hartmann, named for himself and his family. The great wealth generated by Steiner’s businesses had meant that his family latterly associated with the aristocracy, his daughter Emma a close friend of King Edward VII. 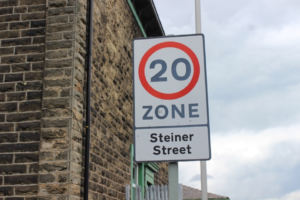 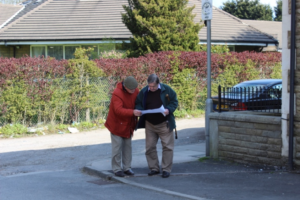 Walks have been a feature of the Local Colour project since it started, we have explored the mid-point of the Leeds Liverpool canal at Church, and regularly walk around Gatty Park recording the seasons through observation, collecting, and photography. Our April walk offered a new way of exploring the local area. A slow meander through a very ordinary urban environment, but one that on closer inspection offered many stories to share and perhaps research more in the future. The post-walk shared conversation on returning to Elmfield Hall included diverse subjects from Victorian industrialists and philanthropy, inequality today to litter and Brexit. It brought to mind a quote from the artist Ann Hamilton, ‘Productive wandering is how projects are made.’ 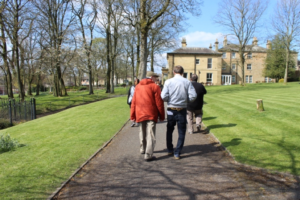 Walking back to Elmfield Hall