Last month Amanda Smethurst, Peer Learning Manager for Creative People and Places (CPP) network, and Jenny Rutter, Deputy Director of Super Slow Way (the CPP project working in Pennine Lancashire) travelled to Australia to give a keynote speech to over 700 delegates at Artlands Victoria. They also led workshop sessions and took part in a panel discussion. Here they reflect on the experience and what they learned.

The invitation from Regional Arts Victoria to Creative People and Places (CPP) network to speak at the national Artlands Victoria conference in Bendigo Australia came as something of a surprise. The biannual conference explores regional arts practice from across the country and beyond, and we were asked to share the context of CPP and our learning about working within communities.

This out-of-the-blue (and once in a lifetime) invitation became a provoking, challenging and enlightening experience for both of us.

Bendigo is a small town in the heart of the goldmining region of Victoria about 2 hours north of Melbourne, and is part of the Victorian State Government ‘Regional Centre of Culture 2018’ initiative. The car hire assistant raised an eyebrow at our intention to visit and suggested that we might like to visit a number of more tourist friendly spots along the way! So we arrived expecting a small town in post-industrial decline, much like many of the CPP places we work in, and therefore were quite shocked by the level of investment in their arts infrastructure. There were venues that rival some of the best spaces in the more cosmopolitan UK cities, fantastic collections, challenging programming and thriving artist communities developing in Bendigo itself and the smaller surrounding towns. Frankly most CPP Places would be thrilled to have even a fraction of this as a foundation for building an engaging cultural offer with and for their communities.

The conference itself was sensitively curated to align with the priorities outlined in the development plan of the local first nations people, the Dja Dja Wurrung. The themes of gathering, giving of gifts and sharing resources being fundamental to the cultural heritage of Australia’s indigenous communities. The Dja Dja Wurrung elders were offered and accepted their place at the heart of the conference narrative and in turn welcomed us, the delegates, in a moving smoke ceremony that invited us to country, recognising the positive intent of the conversation and activity we brought with us. The thoughtfulness and reverence of this process is a testament to the legacy of colonialism and violent settling that weighs heavily on many people working in collaborative arts practice in Australia. An acknowledgement is given at the beginning of every conference talk, every workshop, every meeting, reaffirming the recognition of the Dja Dja Wurrung as the traditional owners of the land on which we are meeting, and offering respect to their elders, past, present and emerging.

The contested histories of white settling and the first nation people’s fight to reclaim their cultural traditions and position as owners of the land, offered both beautiful moments of cultural understanding and complex contradictions, that felt at times impossible to solve. Other challenges of vast geographies, tiny rural communities with small town mentalities and the huge imbalances of investment in the urban metropolises and the regions were highlighted through an array of projects working across the spectrum of community practice. Sadly, it seems that this sensitive approach to confronting the past is not as widespread amongst the wider Australian community, and the impact on people with indigenous heritage is playing out in much the same was that we experience here amongst our own marginalised communities, with significantly reduced life chances and levels of multiple deprivation much higher than with their European neighbours.

Whilst the history of violent settling is very different to the experience of our communities, it felt like there were real parallels in how, in particular, the white working class community in the UK, are being alienated from their own cultural traditions. Through the history of de-industrialisation, and the divisive political and media narratives demonising people who rely on benefits for survival. Whilst at the same time the post-colonial ‘hangover’ still deeply affects the immigrant communities who have relocated to the UK for better lives. We have much to learn from the approach the regional Australian arts sector is taking to working alongside the first people communities, and indeed from the first nation people in how they want to work with the arts sector and be recognised equally for the contributions they bring to that relationship.

It was heartening that we also had a lot to offer to the conference in return. The lessons that we are learning throughout the CPP network, in working with disenfranchised communities to find their voices, shape their places and reclaim their power and identity, resonated deeply with the conference delegates. There was also curiosity about the ways that such a large and complex range of CPP projects can operate as a network, with a genuine commitment to an honest approach to sharing its learning. We were overwhelmed with the responses to our keynote address, with so many people having their own heritage and roots here in the UK and who were moved and inspired by the situations we described happening in the places they or their ancestors had moved away from or been taken away from unwillingly.

With all this pain, with all this unresolved conflict and contradictory need, it would have been easy to come away feeling disheartened, but the spirit and positivity of the people we met and the generous welcome we received from both the arts community and the Dja Dja Wurrung meant we left Australia inspired to think more deeply about ways of confronting the past in order to build better futures, and more convinced than ever of the power of art as a means for positive change.

If you’re interested to know more you can read the post-event resource here and listen to The Drawing Room, an ABC podcast featuring a conversation with Amanda and Jenny.

With thanks to Regional Arts Victoria and the British Council. 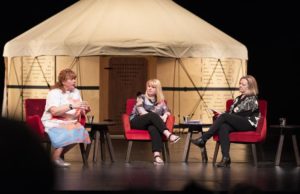 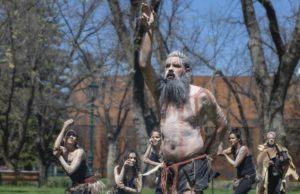