When people ask me what kind of artist I am, they expect a straight forward answer; like “I’m a painter/printmaker/photographer or sculptor.” The truth is, I dread this question, as I find it very difficult to narrow down what I do, and equally difficult to explain in a quick answer, so I usually just say that I – “make work.”

I am comfortable with the word “work.” I like the discipline it suggests and I like the word “make.” This is because I make lots of things – sounds, films, photographs, prints, performances, banners, sculptures. These are all things I’ve made, but  sometimes I just “make things happen,” and that work becomes about a group of people in a particular moment, or a specific location, but always involves people working with me to do something together. When it’s over, there might be a photograph or a film that records what the work was, or there might be nothing at all. You may have had to be there while it was happening.

Mostly I just think of ideas and then I make them. An artist’s job is to make work, so that’s what I do.

Very little of what I make is made in solitary isolation, or in any one medium. I prefer to collaborate, and to make work with people who have the specific skills I need to make the work happen. There is one part of the process however, that I do like doing alone, ideas research; and the best kind is on a project like the ‘The Politics of Cloth.’

Archival commissions like this one allow me to become a detective, disappearing into museum and gallery spaces, and then beyond, vanishing into the images and objects themselves. I’m trying to locate the artists and their stories through their work, hoping to find anything that may have been overlooked, ignored or lost. Not everything you encounter is exciting of course. This is because, just as I find it difficult to explain what kind of work I make, I also find it difficult to explain what kind of art I like. What I’m actually drawn to, is artists with singular vision.  Artists who go their own way, against the odds and make their work with curiosity and abandon, regardless of fashion, status or the opinions of others. I’m always looking for those artists who speak to me across time. Those who leave us with the most basic, but profound message; those who like me, are driven to say – “I was here.”

Art allows us to time travel, to go to times and places we would never have imagined. To see the past, the present and often, something of the future in a piece of work. This is what I see in James Sharples painting ‘The Forge,’ in Blackburn Museum. James is reasonably well known, the painting is often loaned out or requested and is one of the jewels in the crown of the collection in Blackburn. James was born in Yorkshire, but worked all his adult life in a forge in Blackburn. Cotton of course, drew people to towns like Blackburn. The forges, factories, canals and every trade you can imagine was in Blackburn because of cotton. The smoke of the industrial revolution, turned the skies black and the days were filled with noise, dirt and work. We know this because William Billington composed poems that tell us exactly what life in the mills was like. Mitchell and Kenyon filmed workers entering and leaving the same mills, their faces black with the grime of the relentless demands of Empire, and James Sharples, got up at 3 a.m. every day, and painted his master piece ‘The Forge,’ before starting work as a Blacksmith. You can almost hear the deafening  clang of metal and feel the scorching heat of the factory in every delicate brush stroke. It is in these brush strokes that the tools, anvils and beautiful faces, all illuminated in the dark by the flames of the forge itself, come to life. Through paint James suggests the tiles glowing under arches and chains and shows us what a fabulous draughtsman and painter he was. James understood colour and composition, and he clearly knew how to tell the story of the place he worked in an authentic, but poetic manner. James rejected the wistful nostalgia and idealised landscapes beloved of the Victorian gentleman painter, because he wasn’t a gentleman. He was a blacksmith like his father before him. He was working class, he was one of us. He had to work in the forge every day, but he also made work. He was an artist. All four of them, Mitchell, Kenyon, Billington and Sharples, were recording the lives they knew, with no formal training to speak of ,they were self-taught for much of their lives. They all made work because they had to, despite the crippling poverty and back breaking industry of their times. 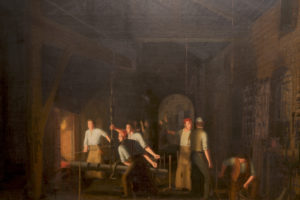 Photograph of The Forge by Lee Smillie. With permission from Blackburn Museum and Art Gallery

James and William were born in 1825, with Mitchel and Kenyon born in 1850 and 1866, but despite the age gap between them, they would likely have passed each other on the streets of Blackburn. The two older men, the poet and the painter; wouldn’t live to see the films of the two younger men, the films would be shown shortly after their deaths, but the world those films captured was theirs and the world they all captured, is ours. The streets and the mills, the parks and the buildings remain; and they are still there, all four of them; if you know how to look.

I am looking for James. I’m obsessed with him. I’m obsessed with them all, but James is special. I have spent hours and hours looking at The Forge in Blackburn Museum, often sitting on my own, sometimes speaking to art students, or just grabbing strangers and telling them of the man who started work at 5 a.m. six days a week, but got up at 3 a.m. to paint. Mostly I just sit and stare across time, until I find myself stood next to James, dressed more like a Communard on a Paris barricade, than a blacksmith; bearded, in duck egg blue shirt, soft red hat lilting to one side, leather apron to the waist and thick braces with stripe detail. I stand behind, the heat of the forge burning my arms. I am there with them, and they with me.

I am obsessed, moving between time and place by seeking out the shared spaces, streets and mills of all of our Blackburns. I’m looking for James everywhere, walking the streets where he was born and lived, even tracking down his etchings and buying them on hotel carparks. Every step takes me closer to James, I find a post card of a union certificate he designed, and another piece of union art falls into place. I keep looking obsessively, and then the museum team find medals from the school of art where I work, awarded to him for his etching of The Forge. The same etching I bought on a car park. I hold the medals in my hands, knowing that his hands grasped them. The hands that painted The Forge.

I am looking for James and William Billington, and begin to wonder if they are looking for me. Are we passing on the streets like ghosts? I feel their presence in the work they made and the work I am making in my studio.

I return to the archive of the library in Blackburn. I’ve spent hours here looking for William Billington for The National Festival of Making a few years ago, and I found him in the leather bound books and envelopes of poetry and news clippings, contained on the heaving shelves of back rooms, new finds emerging as the piles are explored. Last year Mary Painter, the chief archivist sent me a newly discovered photograph of William, dressed in his best and looking well, a far cry from the gaunt, haunted portrait in Blackburn Museum.

Today we are looking for James. I’ve read about a biography of James, but I can’t find it. Mary and I are looking for his obituary in The Times, when we open an envelope from the bottom of a pile on enormous shelves. Unexpectedly, a hand typed letter, and a small, modestly bound book spill out in front of us. It’s the biography, and its beautiful. I turn the first page and James stares back at me. The man in the forge, and the man who painted it. I turn the page and find an illustration of a stained glass window dedicated to him.

It is in the school of art where I work in Blackburn.

Mary and I are speechless.

The next morning I am up a ladder, cleaning the top panel of a huge stained glass window in the old art school in Blackburn. The long panel below the very top pane, the one that’s obscured, is one I’ve photographed, shared on social media and raved about to anyone that would listen. All of these windows are incredibly beautiful, but what I never knew, until I turned that lost biography page, is that the top panel, when visible, contains the name “James Sharples.”

Within minutes, light is shining through his name again.