At the end of May we celebrated the bicentenary of Frederick Albert Gatty at Elmfield Hall, the house he had built in 1853 and lived in until his death in 1888, with a 200th birthday party. 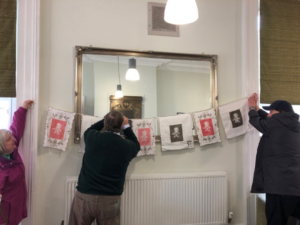 In the run-up to this event the group explored Gatty’s birth year, looking at Lancashire and beyond. We read Percy Bysshe Shelley’s poem, England in 1819 composed as a response to the Peterloo massacre in Manchester, an angry swipe at the ruling class of the time, ‘Rulers who neither see nor feel nor know…’. We learned about the 1819 Cotton Mills and Factories Act that limited the working hours of children, considering the words of Gatty’s business partner Frederick Steiner and his enthusiasm for the ‘benefits’ offered to his child workers – healthy work with Turkey red dyes that produced a ‘perfume equal to the honeysuckle or the rose.’[i] Jumping a century to the centenary of Gatty’s birth in 1919, we looked at a letter, sent by his son Victor, communicating the desire of the Gatty family to give Elmfield Hall and the grounds to the people of Church ‘to forge a permanent link between the past and the future and to connect our parents name to a scheme which we hope will prove of permanent benefit to the township.’ 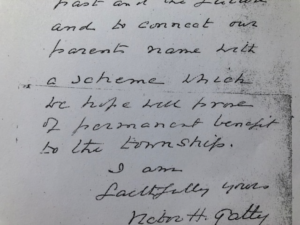 200 years after Gatty’s birth Elmfield Hall is a hive of community-based activity, now the base of Community Solutions North West, a community resource which involves local people to meet local need. It supports, resources and empowers people to improve their health, economic status and emotional wellbeing. Our birthday party offered an opportunity for visitors to find out more about the history of the building and wider area and take part in reminiscing activities. We celebrated with local people and descendants of the Gatty family. Drawing on a nineteenth century tradition we also began a new project, a Signature Cloth, printed with the madder plant that first brought Gatty to Accrington. This will be embroidered by volunteers and records the community at Elmfield Hall today. 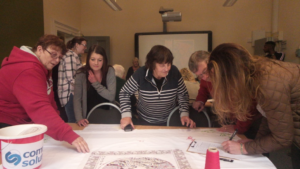