Over the last four years the Local Colour project has been collating an archive related to local stories and the heritage of Elmfield Hall, Gatty Park where we meet each week. Now home to Community Solutions North West the story of how the building and grounds connects with the history of the local dyeing and printing industries feeds into creative work and the development of a community textile garden on site.

The start of a new year has offered me some space to reflect on the Local Colour residency. I am beginning a fourth year of work with a group from the local community in Accrington. Some of the participants have been involved with the project since its start. My previous artist residencies, some working with communities, some not, have lasted a year or less. For me the longevity of this residency is throwing up some interesting observations and questions, some of which I am exploring in more detail as part of a PhD project with the Open University.

Local Colour was initially devised as a one-year engagement, extended with additional funding from Super Slow Way and then Arts Council England. As the work has developed, I can see changes in the way I work alongside the participants. In my initial contract for the residency written with Super Slow Way the phrase ‘Working authentically in collaboration with communities’ was used. Throughout the residency I have been encouraged in a variety of ways to look at this collaborative relationship critically. Recent project work including Mr Gatty’s Experiment Shed, an installation in the semi-derelict dyehouse built for Frederick Albert Gatty at Elmfield Hall, exhibited as part of the British Textile Biennial also offered an opportunity to look at the changing relationships in and dynamics of the project. As part of this project participants were involved in the planning, curation, set up and delivery of the work. 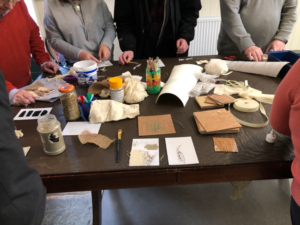 Making collograph print plates for use with our converted mangle press, January 2020

There is also an opportunity to consider the work through differing lenses in the terminology of arts participation. I have recently been thinking more about ideas around co-creation, described by Ben Walmsley as ‘….ultimately messy, raw, incomplete, contingent and context dependent.’[i] (2013, p.117). I can see that the project possesses some aspects of a co-creation process. It has been responsive to the ideas of participants and has offered opportunities for conversations, in the group and with the wider community that have influenced its development. The longevity of the project has played a big part in this process, allowing relationships to strengthen and confidence to grow. Newer members of the group are now mentored by those who have attended for longer. Research ideas and ideas for creative development are increasingly led by the group. However, I also recognise that at various intervals I have consciously made a framework for the project to develop into. I have offered a structure and have let participants fill in gaps and weave a different narrative using their own knowledge and ideas.

The next phase of the project is to look at the centenary of the handing over of Elmfield Hall and Gatty Park to the local community in June 1920. A number of events are planned to explore this aspect of the story including an exhibition at the Haworth Art Gallery in Accrington. I am keen to see how a process of co-creation works for this new phase and will be writing more about it in future blog posts here.