Inside The Experiment Shed

Over the last three years the Local Colour project has been collating an archive related to local stories and the heritage of Elmfield Hall, Gatty Park where we meet each week. Now home to Community Solutions North West the story of how the building and grounds connects with the history of the local dyeing and printing industries feeds into creative work and the development of a community textile garden on site.

Elmfield Hall has a unique example of industrial heritage. At the back of the site is a small building near the stable block and what was once a walled kitchen garden contemporaneous with the house (c. 1853). This was the purpose-built experiment shed or dye laboratory of Frederick Albert Gatty (1819-1888) textile industrialist, chemical manufacturer and inventor of two significant textile dyes during the nineteenth century, an alizarin-based red adaptation for Turkey red dyeing known as Gatty’s red and later a mineral khaki dye patented in 1884. 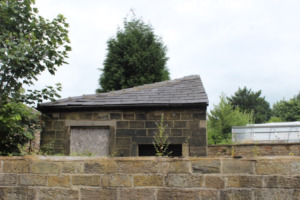 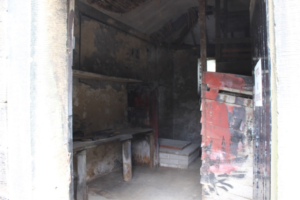 A map of the layout drawn by a participant in the Local Colour group shows a below-floor level dye vat, heating and under-floor piping, a well (now capped), racking, shelving and a quarry tiled work surface. The building would have been well lit with two windows to front and rear and gas lamps on the walls. Outside it is just possible to see where a canopy supported by a metal structure originally sat to the side of the building. The building has had no other use since the 1880s except for storage. It is now in a state of considerable disrepair: the lead lining of the dye vat long gone but the bare bones of the original function of the building still visible. 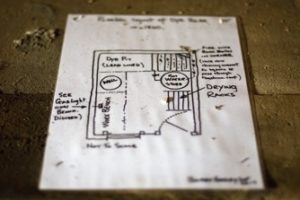 Plan of the dyehouse drawn by Barry, Local Colour participant

Members of the Local Colour project come from many backgrounds including textile manufacture and engineering. The building has been a source of intrigue since the project began, with many interesting conversations about the work Gatty may have done there. We spent some time last year thinking about the development of Gatty’s mineral khaki dye and experimented ourselves, using mud dug from outside the building, tea, coffee and ink. These were all impermanent solutions to the problem of British tropical army dress and the impetus for Gatty’s 1884 patent. More recently our Ewbank mangle printing press has been housed in the building, bringing back practical textile processes to the space perhaps for the first time since Gatty’s death in 1888. 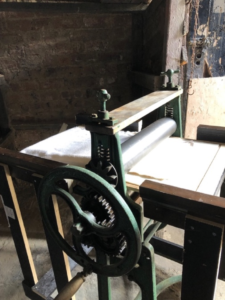 The current condition of the dye house allows a reimagining of the space as it was and also its potential for the future. The project has visited many local museums and exhibitions since 2016 and is developing ideas about how a space focussed on community heritage might be possible one day in the building. This could draw on ideas shared by Bart De Nil and Anthony Richards who describe a framework for museums, a holistic approach that ‘stands for and co-operates with all parts in the community’ a ‘space of care’ that can have an impact on the wellbeing of the most vulnerable[i].