The Local Colour residency based at Elmfield Hall, Gatty Park, Accrington is now in its second year and the group meets on Fridays to explore local heritage through creative engagement and research activities.

The project is based at Community Solutions North West, a social enterprise that specialises in community engagement and support for vulnerable adults. Elmfield Hall is the former home of a textile industrialist, Frederick Albert Gatty (1819 – 1888), who specialised in Turkey red calico printing and dyeing techniques and who later invented a mineral khaki dye for use in army uniforms. Gatty had an experiment shed built next to his house where he could conduct his dyeing and printing research. This is currently a building at risk, virtually untouched since the late nineteenth century. 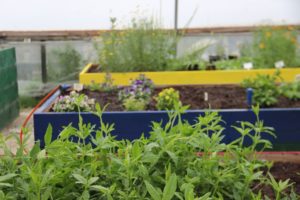 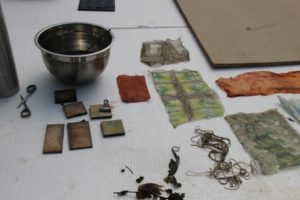 The project has been using a slow methodology developed by the artist, ‘whole process’ working where a group of local people meet weekly and work on seed-to fabric projects. In the first year we focussed on establishing a textile dye garden in one of the polytunnels at the back of the site. We grew the traditional dye plants connected to the industries that thrived in the area during the nineteenth century. Our focus was on madder production, a plant with many historical connections to the local area, not least the creation of ‘Gatty Red’ a dye recipe patented by Gatty and his business partner Frederick Steiner in 1843. The group then worked with the dyes we had grown, producing swatches of locally grown colour  and block prints inspired by walks in the environs around Gatty Park. 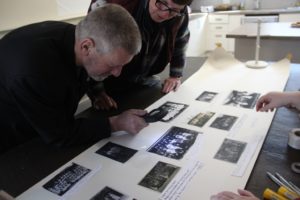 This year the group is continuing to discover more about the story of Gatty, his family, businesses and associates through a programme of collaborative research and creative activities. Part of our focus this time is on the creation of Gatty’s Khaki. Following a visit to India in the early 1880s Gatty became interested in the colour of British Army uniforms. He met with an officer in the Indian army who informed him that the white hot-weather uniforms of the British and Indian troops were leading to high casualties. To stop them being easy targets they were dyeing their uniforms a brownish colour ‘khaki’, literally ‘dust’ in Hindustani, but this was neither wash or light-fast. On his return to Lancashire Gatty experimented with recipes and eventually sent test-dyed uniforms back to India where it was confirmed that they were wash and light-fast. He patented the recipe in 1884. His textile mill, Hagg Works, next to Gatty Park, was adapted for the production of khaki dye. From 1896 all stations abroad in the British army wore khaki uniform replacing the traditional redcoat worn since the 17th century. In the final year of the World War One centenary we are using this story to connect up the other links Elmfield Hall and Gatty Park has to the war, including the use of the main house as a military hospital and the history of the two war memorials on site. We will be displaying some of the work related to the project on Armistice Centenary day 11th November at Gatty Park (more details to follow).