We began to develop a dye plant garden in a poly tunnel at the back of Community Solutions North West when the Local Colour residency began in 2016. The most significant plant in our collection is Rubia tinctorum, or madder, colour source for Turkey red dye. Frederick Albert Gatty successfully patented a modification of the Turkey red process and our project is based at Elmfield Hall in Gatty Park, his former home. From the beginning of March the Local Colour group will spend some time each week working in the garden, growing and using our plants to make dyes and inks. 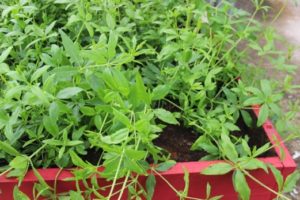 The madder plant is a hardy herbaceous perennial indigenous to Western Asia and has been used as a dyestuff since ancient times. Depending on the mordant (or fixative) used and the strength of dye, the textile shades produced range from pink, red, purple to black. William Morris described madder as ‘yield[ing] on wool a deep-toned blood-red, somewhat bricky and tending to scarlet.’ [i] Madder has been found on cloth in Egyptian tombs and has been cultivated in Europe since the seventh century. In the Middle Ages, the trade madder flourished in Italy in the dye-trade cities of Florence, Genoa and Pisa, and cultivation was established in France and the Netherlands. In the European market standards were introduced to ensure the quality of the product with legal action taken against those who supplied inferior roots or adulterated product. Small pockets of madder growing occurred in England, encouraged by pamphleteers who had travelled to Europe, although none, as far as we know, in Pennine Lancashire.

In eighteenth century Europe demand for madder among textile makers was huge. It was the main ingredient in the creation of Turkey red, a dye for cotton that was bright and reliably colour-fast. The recipe was introduced from Greece to France in the mid-part of the century. The process was complicated and initially expensive, involving multiple-steps and additives to the dye bath that included animal blood, dung and bile, rancid olive oil and hydrochloric acid.[i] A Turkey red dyeing and printing industry emerged in the UK in the 1780s, first in Manchester and then Glasgow. Between 1859 and 1868, wool and calico printers imported an average of 17,500 tons of madder and its derivatives each year, mainly from The Netherlands and France. Madder arrived in Church near Accrington on the Leeds Liverpool Canal, transported on the canal network in forty tonne capacity four-square iron boats called ‘Tom Puddings’.

Locations around Elmfield Hall, and Hagg Works testify to the importance of the dye in the local area. This 1848 map of Church shows Madder Mill Wood, next to Coppy Clough Madder Grinding Mill, and a madder storage barn immediately adjacent to Riding Barn, the area where Elmfield Hall would be built 5 years later.