Object Handling at a Distance

Over the last four years the Local Colour project has been collating an archive related to local stories and the heritage of Elmfield Hall, Gatty Park where we meet each week. Now home to Community Solutions North West the story of how the building and grounds connect with the history of the local dyeing and printing industries feeds into creative work and the development of a community textile garden on site. Since the beginning of social distancing measures some of the Local Colour group has been meeting via zoom each week.

In my last blog post I wrote about the abrupt change for the project at the end of March to online working due to Covid-19. Our work has continued online, an opportunity for a weekly catch up and observations about the changes in our day to day. However, as an artist I have experienced some difficulties in the move to online delivery. The materials we use in creative work are not simple to replicate at home. In addition the group has largely worked together on creative activities rather than individual projects. At the end of March the group had been due to take part in a workshop delivered by historian Bart De Nil to learn about RFID technology with objects for exhibitions in the context of his own work in health and wellbeing projects in the museum and cultural sector in Belgium. I decided to modify the session and we invited Bart to take part in an object handling session using objects from our own homes instead.

The session had been planned to get the group thinking about how they might tell a story through an object as planning for an exhibition due to take place in August 2020 at the Haworth Art Gallery (postponed now until a new date can be organised). The group had been asked the previous week to choose an object from their house that they were happy to tell a story about. So we heard from M about the tail-fin of a German incendiary bomb dropped on Clayton le Moors in 1940 and retrieved by his father; a bone spoon dug up in 1963 at a new sewage works project near Manchester where W was working as a site engineer; and a lead crystal glass from 1890 engraved with the name of B’s grandfather, a thistle and a rose, that was kept behind the bar in a family-owned pub in Birmingham. I shared a piece of traditional embroidery taken by my grandfather when he fled Hungary for Australia during the Second World War; Bart a chisel from a recent woodwork project he had begun in lockdown. 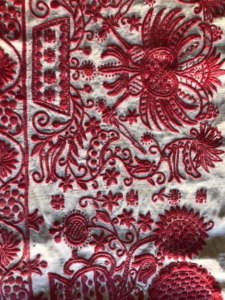 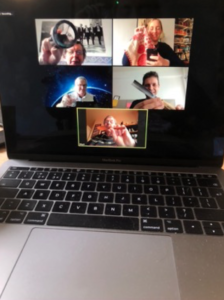 All our objects via Zoom

The session allowed the participants to tell the group about their objects, minus the usual opportunities for passing the items around the table allowing for others to experience the weight, feel of the materials and details of construction. I was conscious of asking more questions than I might normally in a session like this but found that quickly the other members of the group began to interrogate the objects themselves. A question about the bone spoon revealed that it felt smooth to the touch and may have been buried in soil with iron deposits (due to its rusty colour). A group discussion hypothesising about its age and what might have been eaten with it then continued.

A later conversation with the group has led to us deciding to use part of our time online together to create our own ‘Museums of the Home’. We are going to theme our content and interpretation much as we would in a physical exhibition and will share the results here.