Gatty Park, Accrington. Early morning. A warm welcome to the side of Elmfield Hall. I am meeting artist Claire Wellesley Smith just before one of her Local Colour workshops is about to begin. A quick tour of the workshop space, the damp attic, the polytunnels. Madder and other seedlings just beginning to sprout. “PLEASE DO NOT WEED” reads the sign. 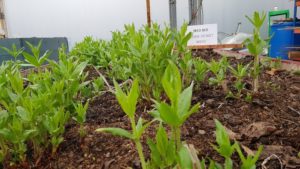 The beginning of a busy second day as critical friend for Super Slow Way. Morning with Claire, early afternoon with another of the project’s commissioned artists – Jamie Holman in Blackburn, then a filmed conversation with Laurie and Kate back at Super Slow Way HQ in Burnley.

Claire’s Local Colour workshop is well attended by participants. Morning storm is no deterrent. I’m surprised by the people there: local historians, ex-textile workers, a woman with a reputation for accurate meteorology, photographer, printmaker, more. They present new research, new ideas and new prints. The primary subject is the Gatty family – textile dyers that specialised in producing high quality dyes for military uniforms: first Turkey Red; later Khaki. The Gattys gifted the park and hall to the council in 1920. We talk about the Gattys, look at images of the Gattys (including pop-art Gattys made by one of the participants), think about how to celebrate the Gattys.

Local Colour is about history and textiles and horticulture. When grown, the seedlings will be used to produce dyes for future workshops.

So many great conversations between participants and the artist. I feel privileged.

A visitor arrives. She talks about Ethel Carnie Holdsworth. Ethel was a working-class writer, feminist, and socialist activist from the local area. Her work is little-known. So much work by radical women remains little-known. Titles such as Rhymes from the Factory, Songs of a Factory Girl, Voices of Womanhood and Miss Nobody speak for themselves. We get to hold some original books. Fascinated, the group talks animatedly about past, present and future. We talk about how things have changed. Would Ethel be considered as a hard-left activist nowadays? Are we really any more free now than before? 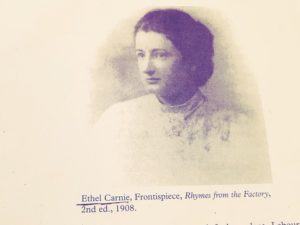 Some people seem a little reticent when asked about producing some art works about the Gattys. They wonder if the group should consider working-class people in the area: people more like Ethel as well as the wealthy Gattys. An interesting turn for the project, perhaps? How far have the participants’ aspirations moved on? How far might Local Colour go? 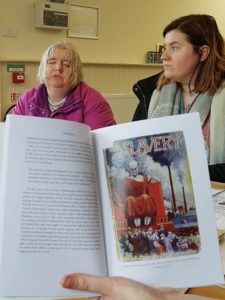 Meeting Jamie Holman is very different. An intense conversation in which we talk about acid house and banner making and drugs and football hooliganism and fashion and individualism and cooperativism and textile making and being working class and art world elitism and instrumentalism and politics and freedom and council estates and misconceptions and witches and hares and spirits and stone circles and the first cowboy film and paintings in museums and street plaques and searching for James Sharples and the NHS and Creative People and Places and appropriation and Super Slow Way and what is considered “arts and culture” and what is not… 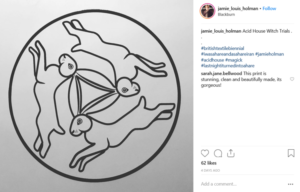 Blackburn is ever-present. Jamie has a passion for Blackburn. Having produced the first part of Live the Dream for Super Slow Way in 2018 – a banner that commemorated raves and Blackburn that was paraded through the streets of Preston, Jamie is looking for the second part of the project to become much more pointed, more political. Jamie is exploring “the politics of cloth” and is in the midst of a very complex and personal journey of exploration. I will not give too much more away about his plans, but you can see snippets on Jamie’s Instagram page.

Jamie is acutely aware of the constraints that can be placed on artists by commissioners and funders. He is wary but, as many of us are, often willing to oblige because that’s part of the relationship that develops. Super Slow Way are different, Jamie says, because Jennie and Laurie trust artists. He feels he can do pretty much what he wants. He knows he must tick some boxes along the way but is unperturbed. He’s aware of the need to engage those classified (by others) as “low engagers” but has a plan… Jamie wants to push himself to see how far he can go with his vision of a politics of cloth.

Back in Burnley and the planned filmed conversation with Laurie doesn’t emerge. Just doesn’t feel like the right moment. It could have been, but I wasn’t sure, so we talked it through instead. Our conversation would have made a good film but that’s ok. We agree to film a conversation next time we meet. It will pick up on this one.

The starting point: how far can we go?

Claire and her group are exploring how far they can go in Accrington – beyond wealthy mill owners and philanthropists and into the un- or under-told histories of working-class people like Ethel Carnie Holdsworth.

Jamie is channelling past lives, past histories, witchcraft, forges, hares and a whole lot more in what will – he is adamant – be his most challenging and political work to date. How far can he go? 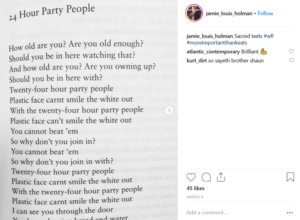 So then how far can we go? 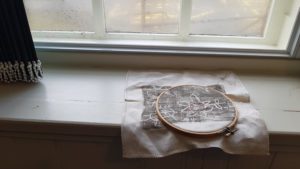 For more from Dr Stephen Pritchard see his blog by clicking here.